This post is sequel to the earlier post,  Handling Failure On Your Way To Success 1 in which two important tips for dealing with setbacks on one’s success journey were given. You may want to open the link and read it up as well, if you missed that. 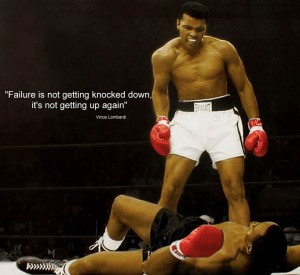 Failing is never easy, it induces feelings that can crush the human spirit, make you forsake your dreams and vision and look at yourself as never good enough. The flipside is, with God, failure can be the catalyst for a great victory. Continuing from our previous discussion on this subject, let’s attempt to analyze what failure is.

3. Failure simply means you didn’t get it right based on the set standard of assessment.

The ability to handle failure in its various forms and degrees is a vital part of the spiritual life of a believer. The mature believer is the one who understands the importance of choosing the right standard of measurement to determine success and failure. In 2Corinthians 10:12, Paul wrote ‘ For we dare not make ourselves of the number or compare ourselves with some that commend themselves; but they measuring themselves by themselves, and comparing themselves among themselves are not wise’. Please don’t fall into this kind of foolishness. Don’t beat yourself down because you failed in an area others may have been succeeding at without understanding your purpose and calling in life. We are all to do our best according to the abilities God has given each of us and we are right in using others as models of Christ-like character as seen in 1Cor 11:1. But this is not the same as when we compare ourselves with others from the perspective of their position, gifts, abilities, possessions and other such standards and then attempt to base our success or failure or that of someone else based on such comparisons.

During my secondary school and undergraduate study, I was an A student but had friends who barely made B’s and C’s in most courses irrespective of their diligence. Some of them understood their abilities and gifts in other areas and worked on them. Today, while I am proud to be a practicing engineer, some of my colleagues back then are doing very well in other areas of life like in sports, ministry and business. Don’t judge yourself a failure through another man’s lens!

4. God could have a hand in what we perceive as failure in order to bring out success in us and ultimately bring glory to His name. Our failures are often rungs on the ladder of growth – we should learn and trust God rather than grovel in the dirt. If the failure is as a result of our negligence, sin, or wrong approach to issues, we need to receive forgiveness from the Savior and believe that we are freed because nothing can separate us from the love of Christ. Failure could come as a result of unforeseen circumstances beyond our control which can affect even the believer, Yes!, the believer. One scripture that has come to mean so much to me is Romans 8:28 ‘And we know that all things work together for good to them that love God, to them who are the called according to his purpose’, walking in God’s purpose for my life makes me relaxed in the face of challenges knowing that God is ultimately shaping the course of my life for His glory. Sometime last year, I applied for a role in an oil company which I had to go through a series of tests and interviews for. I was one of the last 5 candidates left for the role at the last stage of the recruitment out of thousands of applicants. After the last interview with board of directors, they were so impressed with me that I thought that the job was mine already, but a week after that, I got a regret mail from the Human Resource Manager stating reasons why I was not selected among the last three. I felt so bad because I thought I would do better and get better remuneration in that company but lo, three months after the recruitment, the company downsized due to the sharp fall in oil prices, and that affected some of the newly recruited engineers. The Holy Spirit reminded me that God is the ultimate architect of my destiny and what I may call failure may not be what it seems. I refuse to fret because God is involved!

Justice Nwade is an avid reader and teacher, cofounder and writer at http://www.powertimes.com.ng. He is a director at Ecophilia Energy limited, an Energy professional and currently a postgraduate student in Chemical Engineering. He’s a son of the Most High God and is passionate about seeing young people play at the highest level in life.

2 thoughts on “Handling Failure On Your Way To Success 2”